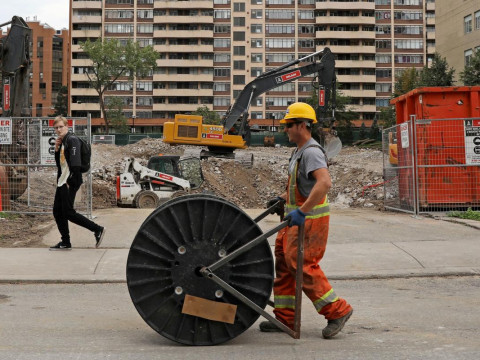 The Canadian economy recorded a massive job gain in October, coming in 10 times higher than expected, with the jobless rate remaining unchanged. The positive news came a week after a lower-than-expected interest rate hike by the Bank of Canada (BOC).
The economy gained a net 108,300 jobs last month, smashing forecasts for 10,000 new jobs, while the jobless rate was unchanged at 5.2%. The monster gain was entirely in full-time work, spread across both the goods and services sectors.
More data is due to be considered before the next BOC rate meeting in December, but the jobs surge suggests another 50 basis points increase may be in the works.
The BOC lifted its policy rate by 50 basis points to 3.75% last week and said while more increases can be expected, it was nearing the end of its tightening campaign.
The employment report put wind in the sails of money market bets of another large hike in December, with a nearly 70% chance of a 50-basis-point increase and the policy rate now seen hitting 4.5% early next year.
What does this mean for me?
Not only were there more jobs available in October, but they paid more. The average hourly wage for permanent employees rose 5.5% on a year-on-year basis, up from 5.2% in September. Total employment edged just above May 2022 levels. With positive news in the air, the Canadian dollar was trading 1.6% higher at 1.3525 to the US dollar.