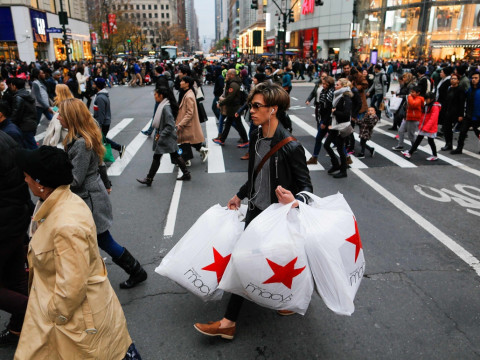 US consumer spending rose strongly in October while inflation settled, giving the economy a lift at the start of the fourth quarter as it squares up to headwinds from the Federal Reserve’s decisive monetary policy tightening. Meanwhile, the labor market continues to demonstrate resilience. Fewer Americans filed new claims for unemployment benefits last week, reducing the jump from the previous week.
However, the overall picture was muddled by data revealing a contraction in manufacturing activity in November, the first time in over two years this has happened at this time of year. Despite factories reporting weakening demand, analysts are staying optimistic that any incoming recession will be short-lived.
Bullish consumer spending is running above normal levels, giving economists hope that even a weak November and December will not lead to a worrying quarterly picture. Consumer spending accounts for close to 70% of the US economy.
Raw spending on consumer goods rose 1.4% in October, driven by purchases of motor vehicles, furniture and recreational goods. Spending on services grew 0.5%, lifted by expenditure at restaurants and bars, as well as on housing and utilities.
What does this mean for me?
Inflation-adjusted consumer spending rose 0.5% in October, the most since January. Economic growth estimates for the fourth quarter are as high as 2.8% on an annualized basis. All this has contributed to economic growth of 2.9% in the third quarter. Economists expect the short-term future will have bumps in the road, but may not be as bad as once feared.